With the housing industry coming under more pressure and legislative change than ever before, the image of a chameleon was chosen to represent the theme as a metaphor for positive adaptation to change, with the agility to not only survive but also thrive.

The three key areas of change came from the following topics:
‍
1. The repercussions of the Grenfell Tower tragedy.
2. Government pledges to regulate managing agents through primary legislation.
3. Reforming of leasehold law.

With the video theme and objective predefined by the client, our focus was orientated around marrying the proposed theme with the key messages in a fun, dynamic narrative. The decision was made to create a 3D animated chameleon, who’s colours transitioned to reveal the titles for each key topic as they were introduced.

Continue reading for a full technical breakdown of just how we achieved this...

The chosen storyboard concept commenced with a white chameleon. Upon introducing each topic the chameleon burst into different colours.

Phase 1: Matching the client's references
UV mapping is the 3D modelling process of projecting a 2D image to a 3D model’s surface for texture mapping 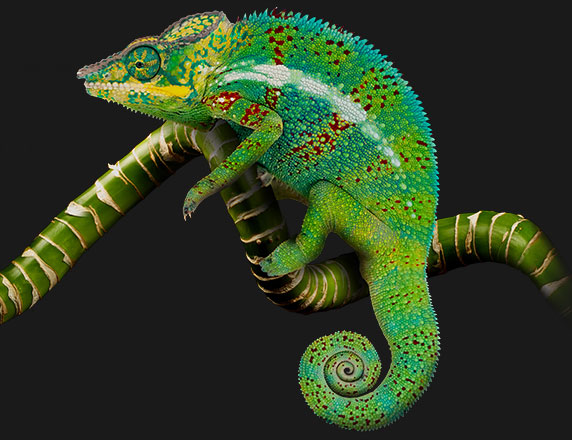 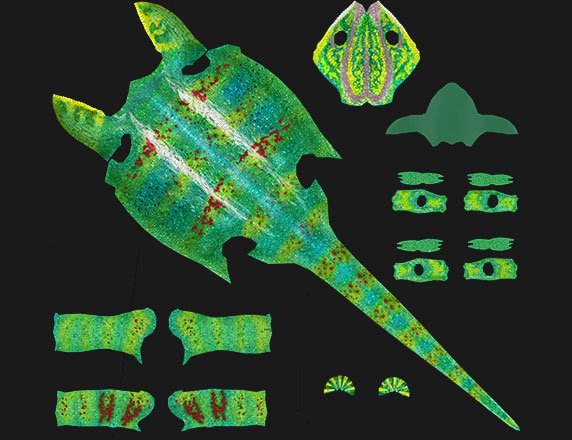 UV map
This UV map was digitally painted to create a close representation of the colouring of the reference image; all subsequent UV maps for this project were derived from the patterning of this map. 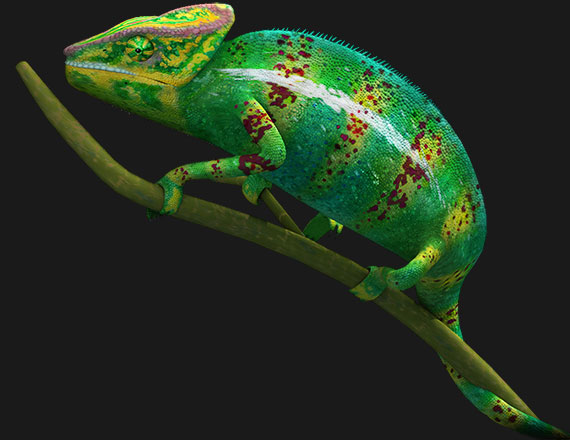 3D model with applied UV map
This is the 3D model of the chameleon, as modified to reflect the reference image. The newly created UV Map was then applied.

The UV map for the original colouring of the chameleon was digitally painted in Adobe Photoshop to create a close representation of the colouringof the reference image.

During the skin transition animation phase, two different coloured UV maps are assigned to either black or white (one to the black, one to the white). The transition between black and white effectively is the control that fades the first UV map out, whilst simultaneously revealing the second UV map.

Fractal noise displacement was then added for authentic colour changes (as seen in the test patch phases below). 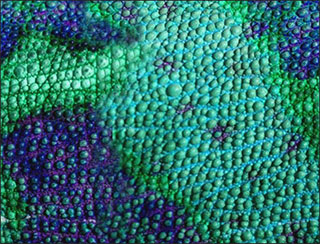 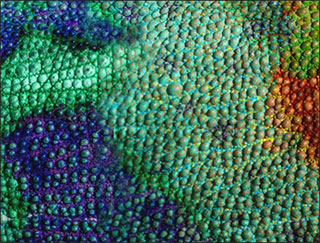 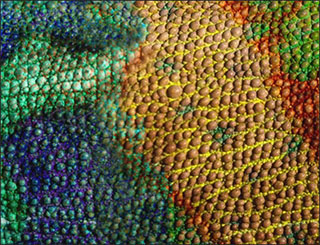 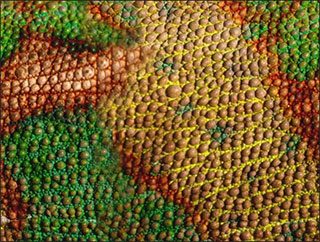 Phase 4: Text testing
The same principle of using alpha maps for skin transitions was applied as a method to introduce text onto the skin of the chameleon.

The text introduced the key topics of discussion for the conference.

Phase 5: Plant UV maps
Plant UV map colours were chosen to match and complement the chameleon skin colours. These were created as seamless textures to avoid seam-lines when applied to the model. 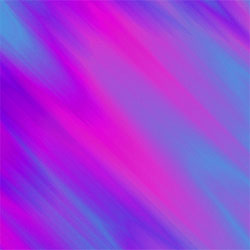 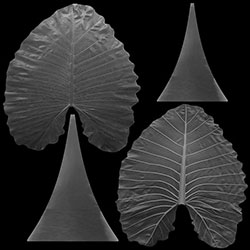 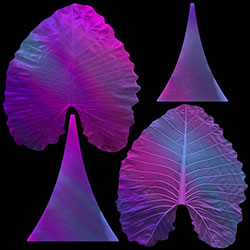 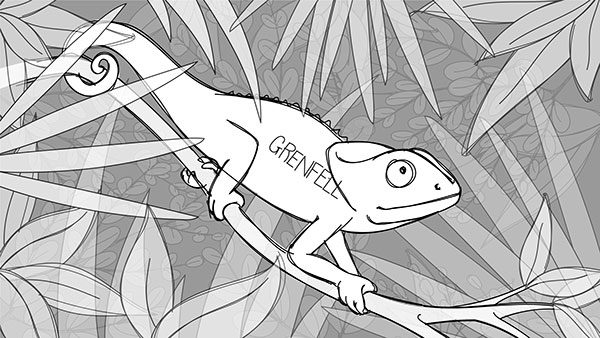 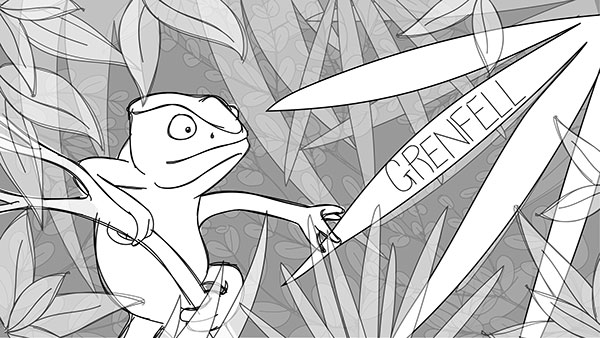 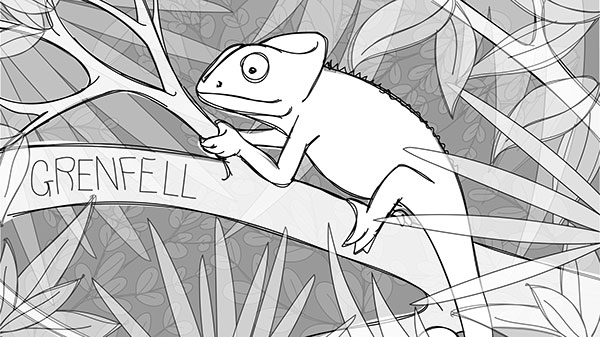 Animation refinement
Building the environment around the chameleon 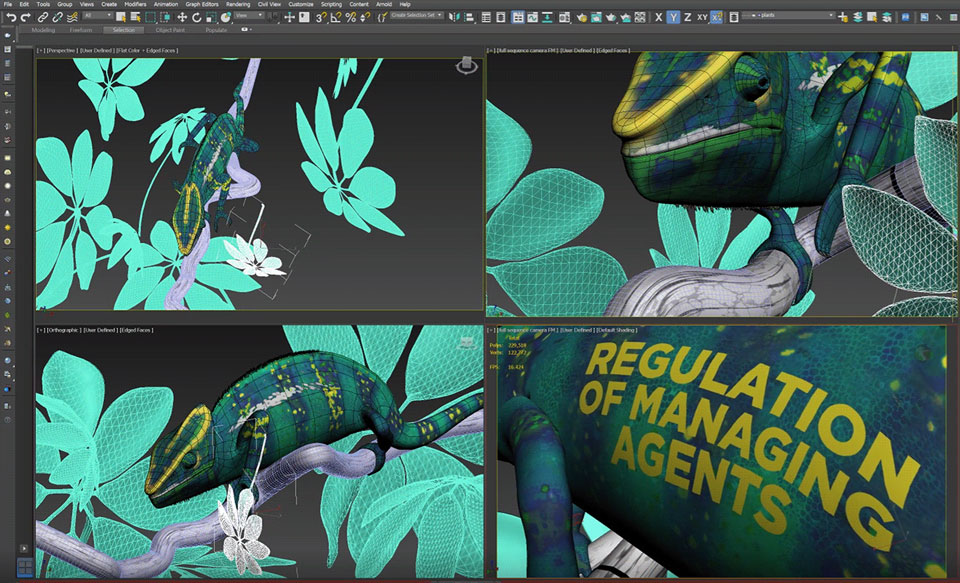 Tail animation
In order to animate the tail, the straightened tail graphic needed to be assigned bones in 3Dsmax (i.e. jointed sections that could be sequentially animated). The principle is the same as that of a real life skeleton: 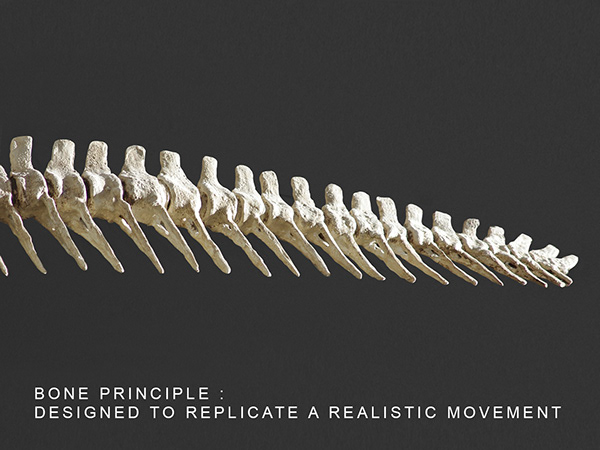 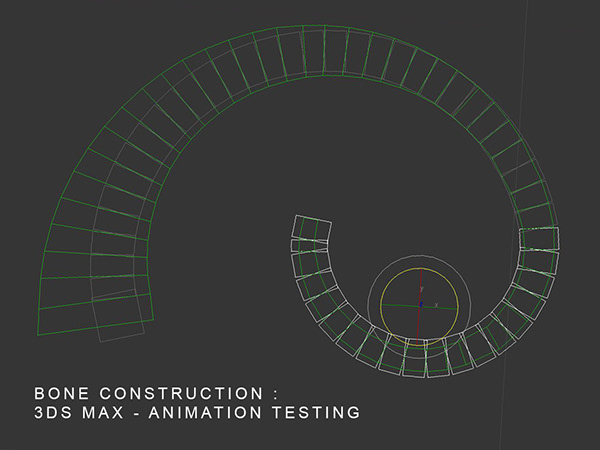 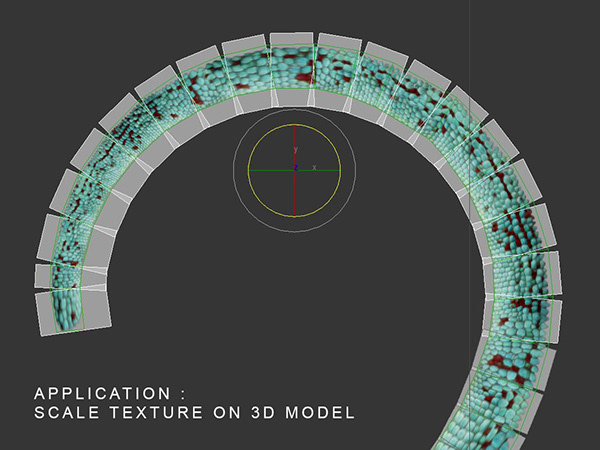